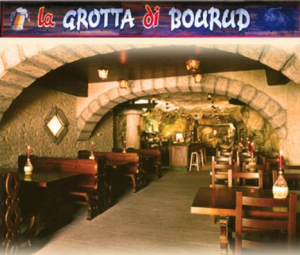 The legend tells that ... ...Cournud Bourud was the only French soldier who survived after the war that took place on the Mount Assietta in 1740/1750. He hid himself in a cave on Mount Genevris and lived as an hermit talking only to animals. One day he moved to the village but, after a short while, went back to his cave and buried all his possessions somewhere in the mountain. Up to now no one has found his treasure! The owners of the "Bourud's cave" are waiting for you in a fascinating place where you can taste local products and special wines. ...If you pay attention you can also sight Cournud Bourud watching you.